Located in Singapore, Nanyang Technological University (NTU) is one of Asia’s pre-eminent research universities. NTU houses over 10 distinct schools and is a top destination for international talent around the world.

As a school that is home to such an extremely diverse student body, the university is always working to offer programming that properly engages its students. To this end, NTU was eager to adapt to today’s mobile trend and offer students a digital medium to access university programming.

A Diverse Set of Needs

NTU wanted to digitize various facets of its student programming. For their initial rollout, NTU wanted to incorporate events such as career fairs and study trips. Consequently, the opinions and ideas of multiple teams at NTU had to be properly consulted to encompass everyone’s ideas.

In addition to the diverse needs of NTU’s programming, the digital solution had to account for the varied needs of NTU’s students. Important requirements such as language compatibility and formatting needed to be accounted for since the student body had a large international contingent.

In 2017, NTU partnered with Eventus to launch mobile apps across several offices including the career office, student services office, and study abroad office.

Because of the unique needs of these offices, each one had access to its own unique app. With their own exclusive digital presence, each team had the luxury of creating a custom experience that could be changed and updated in real time to fit student needs.

Here are a few examples of how this was done: 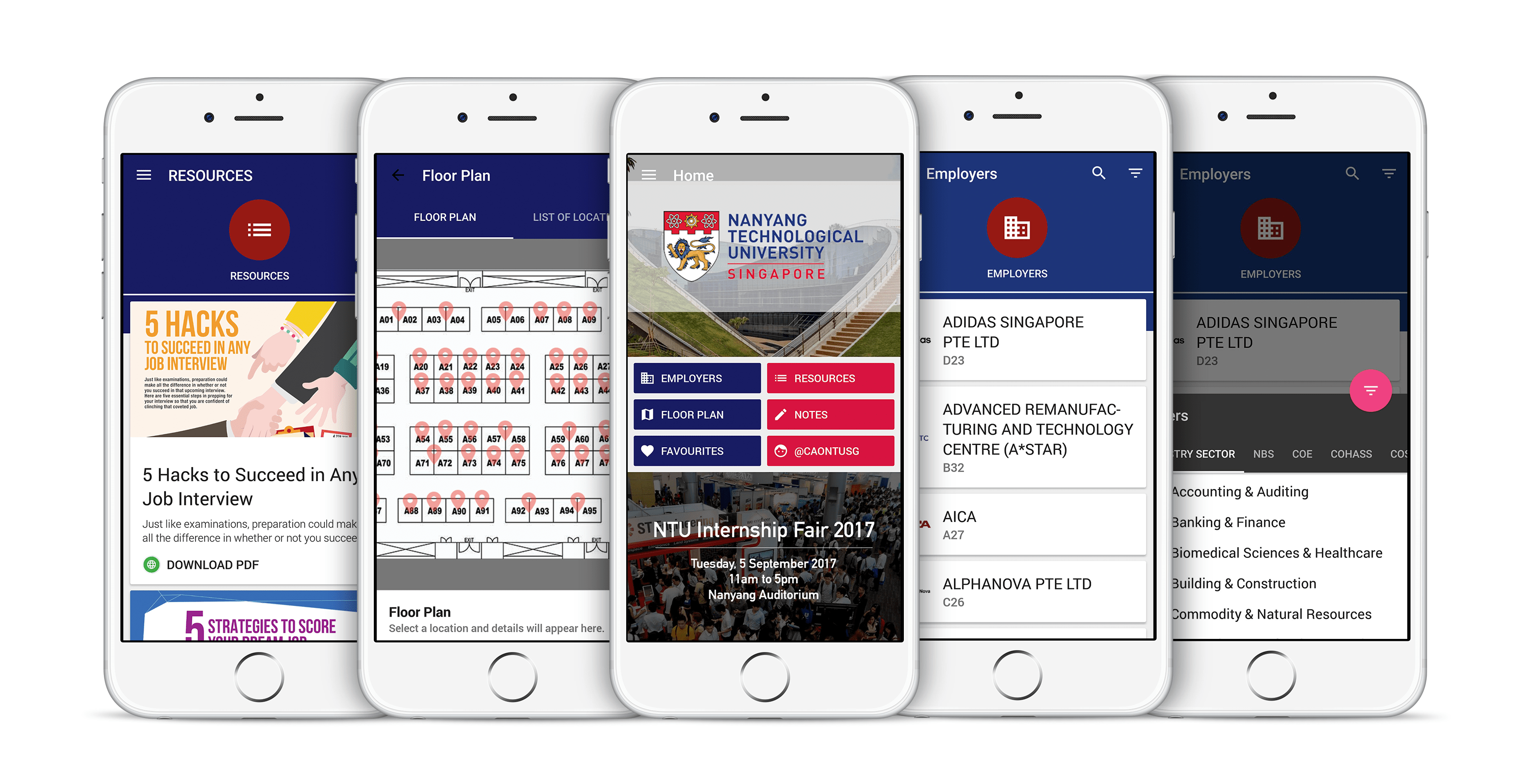 The NTU Career Office launched the NTU Career App to innovate beyond the traditional paper programming at their career events. At career fairs, students simply needed to download the app to get quick access to interactive employer profiles, floor plans, and career tips. It was no longer necessary for students to carry around physical booklets.

In addition to these informational benefits, the app provided advanced data analytics that provided insights into student usage patterns. For example, admins could view metrics such as student interactions with in-app information to better understand which resources their students were drawn to.

Because study trips are often a logistical nightmare, NTU took advantage of a mobile app for their study trips. In addition to providing an easy means of content distribution, the team understood that the app offered logistical advantages since it could be updated in real time to support a constantly changing itinerary.

Everything including class schedules, travel plans, and professor profiles was digitized within the app and updated accordingly when changes occurred.

Furthermore, to account for their large body of international students from China, NTU’s study trip app offered language support for both English and Simplified Mandarin, thus providing a flexible experience for their students. 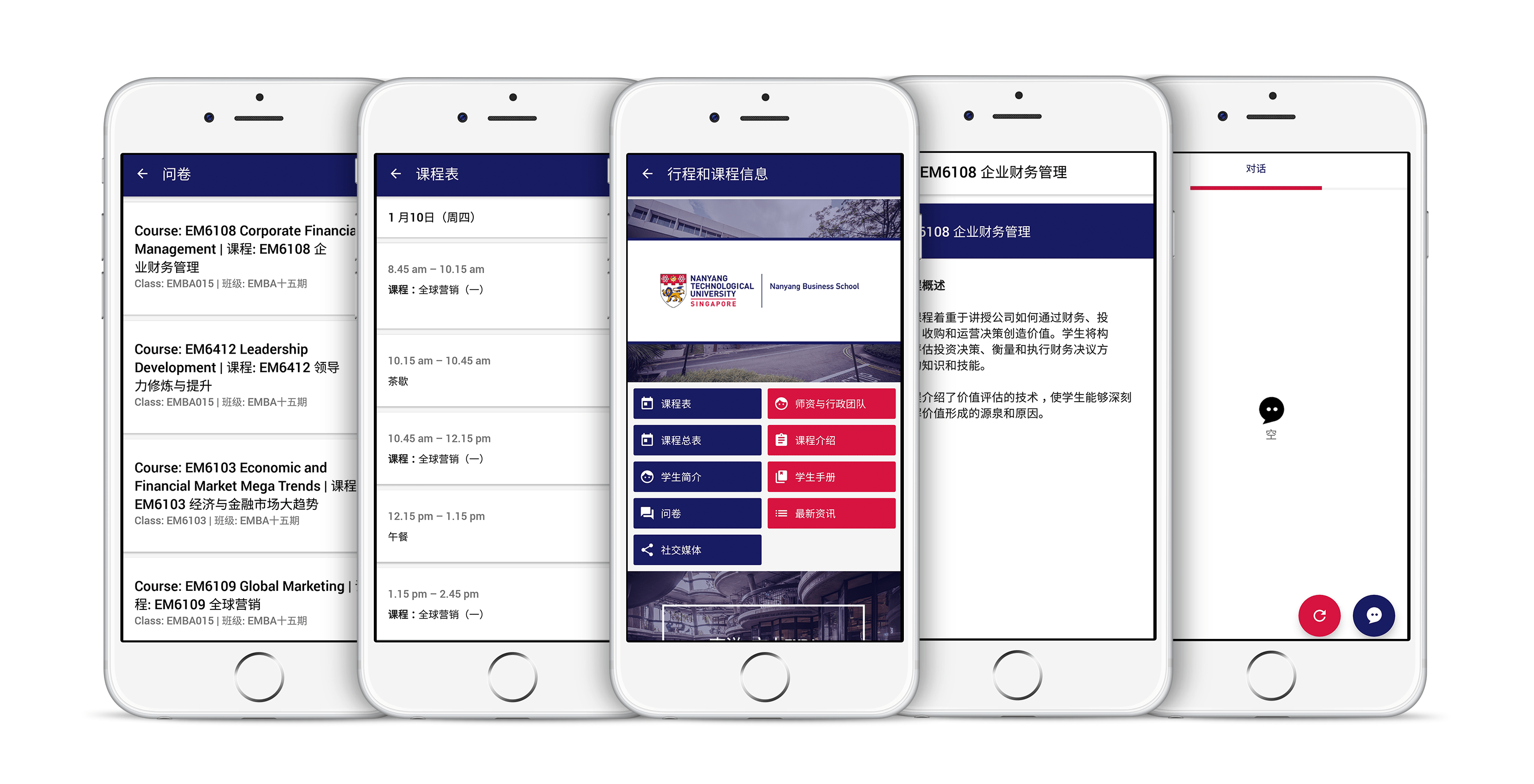 To better prepare incoming students, the student services office provided a mobile app that included important academic resources and to-do lists for their students. Event agendas, campus maps, and session surveys were all were neatly organized within the mobile app.

Furthermore, the app was equipped with several of Eventus’s social features. Before students even came on campus, they had the ability to post in social feeds and connect with each other. Such capabilities enabled new connections that weren’t possible before. For instance, students from similar backgrounds or home countries were able to connect with one other and build camaraderie right through the app.

Your message has been received.

Your submission has been received.
We'll get back to you shortly.

By creating custom mobile experiences for their programs, NTU was able to drive tremendous engagement across their apps. With over 4500 cumulative downloads in the span of a few months, NTU's mobile apps saw over 200,000 resource impressions and over 20,000 unique user sessions. These in-app impressions included the viewing of student resources, campus announcements, and social feeds. Consequently, it was very promising for NTU to see that students were embracing mobile resources.

The coordinators of NTU's student programming also benefited heavily from the new app launches. With the ability to push out updated resources and messages in real time, they didn't need to deal with the headache of outdated programs. On top of that, the benefit of having real-time analytics meant that the NTU team now had the ability to properly gauge student activity and properly adapt to it.

The launch of these inaugural apps for NTU’s programming is just the beginning. Although several offices have now digitized their programs with a mobile app, there are still many opportunities to advance this trend with other offices at the university. That said, this launch firmly positions NTU to properly meet students where they are in today’s mobile age.

Your message has been received.

Your submission has been received.
We'll get back to you shortly.